Spock, Science Fiction, and Me 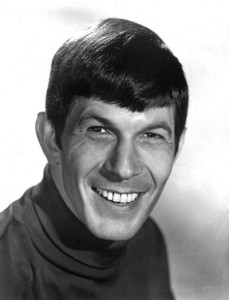 The one bright spot is, at 83, he did live up to Spock’s famous credo. (photo: Wiki Commons.)

The death of Leonard Nimoy was sad news. There are very few actors who spend their entire careers so closely associated with a single character—and Spock was a great one. I still remember the first time I saw Leonard Nimoy interviewed, how ironically alien and unnatural it was to see him without pointy, prosthetic ears.

His death brought back a lot of fond memories of growing up watching reruns of Star Trek‘s original series. Spock’s character will always have particular appeal to me. Being quite a mixed bag myself, I couldn’t help but feel akin to his multi-ethnic (multi-species?) birth.

Star Trek also reminds me of the way science-fiction, with its limitless possibilities, has the capacity to inspire change. The show was famous for it. Mae Jemison, the first black woman to fly aboard NASA’s Space Shuttle, said seeing Uhura on television was the reason she became an astronaut. For me, Spock had a similar effect.

He taught me it was possible to be two (or three, or four, or many) things at once. As the son of two parents who are of mixed backgrounds themselves, I really shouldn’t have required reruns of an old TV show to learn that lesson. But I did.

In retrospect, Leonard Nimoy also taught me the importance of role models, whether real or imaginary, of seeing something of yourself in them, and allowing them to inspire you.

Thank you, Mr. Nimoy, you were very good at that.