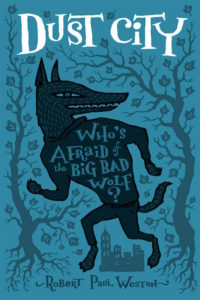 When your dad’s a big bad wolf, life is no fairy tale.

Henry Whelp is the son of a notorious wolf serving a life sentence for the double murder of a little girl and her grandmother. When he tries to prove his father’s innocence, he uncovers a horrific conspiracy.

“The premise is fractured fairy tale, but the play is pure noir: Chinatown via the Brothers Grimm.” —Booklist

“Weston has created a tightly paced mystery, a coming of age story, and a vivid fantasy…Dust City is a winner.” —Quill and Quire

“Think of the children’s books you read as a child, where the animals wore clothes and walked on two legs and were human in every way but looks. Now take those images and put them into Batman’s Gotham City, and that’s the setting for Dust City.” —Indiebound

“Dust City is the Grimm Fairy Tales as imagined by Guy Ritchie.” —The National Post

“Dust City will appeal to Gaiman, Gorey, Hurley, or Burton fans, or anyone who wants a bit of sharp teeth with their nighttime fractured fairy tale.” —Fiendishly Bookish

“Dust City has all the trappings of noir storytelling—except that its characters are wolves, foxes, and ravens, and the illicit drug eating away at the populace is an intoxicating form of fairy dust. It’s as if James Ellroy were one of the Brothers Grimm.” —The Georgia Straight

“Dust City is one of those novels that can be enjoyed on several levels, and which says as much about the dark underbelly of our world today as it does about those old stories, which first caught our imagination almost two-hundred years ago.” —CBC Radio

“A must add to any urban fantasy enthusiast’s bookshelf!” —Novels Now

“Weston’s book is dark, gritty, and violent, but stands out from many on the YA shelf with it’s fairy-tale inspired twist. Fairy tales were always scary, but Weston updates the issues and ideas, creating a gritty novel that will resonate with today’s teens.” —Reading for Ladies and Gentlemen of Quality

“This is not your kid sister’s Cinderella retelling. This book has the fairytale version of heroin addicts, drug runners, genocide, caste systems, and genetic experimentation. It is hardcore; it is badass; and it is dark, dark dark. Kudos to Weston for finally writing a story worthy of the Brother’s Grimm fables he satirizes.” —YA Highway