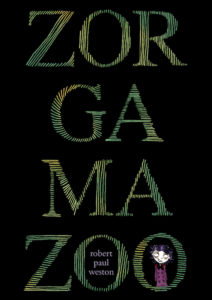 The classic, internationally award-winning novel-in-verse that continues to astonish readers around the world…

A brave young girl. An eccentric, underground creature. A secret map. A bizarre lottery. An alien invasion. A sport that brings together the finer points of cricket, swimming, and chess. Zorgamazoo is about all this—and more.

What’s that? You don’t believe me?

A discussion guide for teachers and educators is here, courtesy of TeacherVision.

“A natural descendant of the works of Dr. Seuss and Roald Dahl, while hewing close to the droll atmospherics of Edward Gorey and Lemony Snicket.” —Booklist (starred review; top ten debut of 2008)

“Weston’s debut fantasy in rhymed verse is at once silly and gross. If Seuss and Dahl collaborated early in their careers, something similar might have resulted…Snicket fans and reluctant readers not afraid of a peek at verse will likely feel right at home.” —Kirkus Reviews

“Weston maintains the rhythm and energy of sing-song rhyming couplets throughout the tale and holds his audience’s interest with suspense and dashes of humor. Give this one to readers who enjoy a little nonsense.” —School Library Journal

“Zorgamazoo is one of the most exciting children’s books to hit the shelves in a long time…If you’re looking for a novel that is sure to excite young audiences about reading and writing, Zorgamazoo is it.” —Canadian Children’s Book News

“Zorgamazoo is a story rich in clever wordplay, unusual characters, and fantastic circumstances…The book’s illustrations are reminiscent of the oval-eyed, twiggish vulnerability of Tim Burton’s creations, and the details of the story traverse some of the same dark territory.” —Quill & Quire

“Dark and funny and very surprising…deftly written rhyming couplets positively roll off the tongue…Add to the amazingly written rhymes some charming illustrations reminscient of Edward Gorey, and you’ve got one heckuva fun adventure.” —DPL Kids Blog

“If you can imagine the spawn of the Harry Potter series and Dr. Seuss’s “There’s a Wocket in My Pocket,” you are on the right track to understanding the magical, hilarious whiz-bang creativity of Zorgamazoo.” —Tegan, Queen Anne Books (Seattle)